There are so many beer events on here in Beervana that I’m still having a hard time keeping this blog updated with the events I actually attend. There have been quite a few events we have attended lately so I will give each event it's own post in no particular  order. Also I will post few pictures on this blog and also will try to put most of them on my Flickr page. 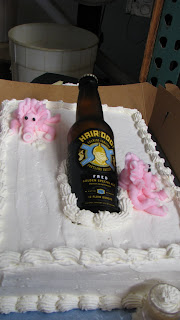 Saturday FredFest 2009 was held at Hair of the Dog Brewing n SE Portland. It was a blast as usual. Having attended this event once before I kind of knew what to expect. This year the event exceeded my expectations.
As Jeff so eloquently put
it - FredFest is more than a just a festival, it is actually a birthday party for a man who has taught us all a great deal about beer styles, food pairings, and about overall enjoyment of beer. It was also a great time to catch up with old some friends in the beer community and meet some new ones as well.
Teresa and I got down to the fest about the same time as Bill, just as they were letting people in.

Here are a few stand-outs for me:
Firestone Walker Brewing Company - Abacus
Hopworks Urban Brewery (HUB) - Bourbon BBL Noggin Floggin
Deschutes Brewery - Mirror Mirror From the Wood
Bend Brewing Company - Black Diamond Dark Lager
Also Full Sail Brewing Company - 1998 Boilermaker was very tasty too.
The oldest beer there was a keg of Saxer Brewing Company - 1994 Vintage Dopplebock. I was pleasantly surprised by how well it held up over time. There was some oxidation, but not as much as one would expect from a beer this age. 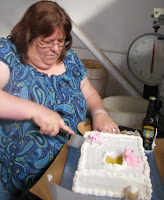 Teresa cutting one of the birthday cakes.
With a little organized coaxing from Bill we got a picture of a few of the bloggers/writers with Fred (and Rob Widmer for some reason...)  I'm not sure who took it.

What a fun party it was!
Happy Birthday Fred!
For more on FredFest check out these bloggers sites: Jeff, Derek, & Bill's
Posted by HumuloneRed

Hallelujah, you posted something! We won't have to crop you out of the Fred-with-bloggers picture.