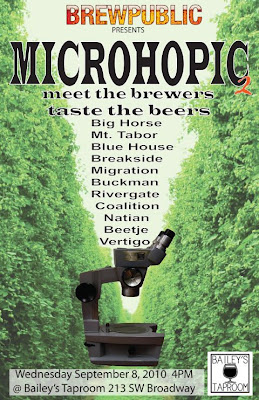 Today our good friends over a Brewpublic are holding their 2nd Mirohopic Festival down at Bailey's Taproom.
My wife and I went to the first Microhopic Fest back in June and had blast! This time there will be more breweries represented. A couple of the breweries couldn't make it for various reasons (Rivergate Brewing just closed down) but there are still quite a few beers to be had. Here is the press release from Brewpublic:

PORTLAND, OR –Brewpublic is pleased to announce our second Microhopic event featuring some of the area’s smallest commercial breweries and even a few we’re sure you have not experienced before. Microhopic 2 is not a nano beer event. We like to think of it more as a pico, femto, atto, zepto, or even yotto brew event. One of Portland’s best craft beer pubs, Bailey’s Taproom will devote more than half of their 20 taplines for the following exclusive breweries:
Big Horse: Hood River, Oregon’s Big Horse Brewing features the beer of imaginative brewmaster Jason Kahler. At this event, folks will get to try the brewery’s Pale Rider IPA (6.7% ABV) featuring CTZ hops.
Mount Tabor: A relative newcomer to the burgeoning Portland craft beer scene, this small Montavilla neighborhood brewery lead by brewer Eric Surface and owner Brian Maher will bring their Little Bull Stout, a full bodied 7% 100+ IBU hoppy treat.
Blue House: From the hidden westside village of Vernonia, Oregon comes a special Blueberry Wheat Ale made with Oregon blueberries by brewer Brett Costley of Blue House Cafe, a unique and Mediterranean restaurant offering delicious food and artisan beer.
Breakside Brewery: Finally Portland’s long awaited Northside brewery Breakside will be showcasing the craft beers from brewer Ben Edmunds. For this event, look for a special Texas Brown Ale (dark hoppy ale) to quench the thirst of the beer lovers.
Migration: Brewer Mike Branes combines Nuggets, Cascades, and Fuggles with Crystal, Carmel, and Biscuit malts for this flagship offering known as the MPA (Migration Pale Ale). Copper in color with light to medium body. 5.5% ABV 55 IBU.
Buckman Village Brewery: The Green Dragon Pub & Bistro’s own small brewery known as Buckman offers us a glimpse into the early phase of their brewery with their Chamomellow Ale made by brewer John Couchot. This chamomile-infused golden ale weighs in around 6% ABV, 19 IBU. Lots of honey apple notes from the herbal spice.
Rivergate: Deep in North Portland, Rivergate Brewing at the North End Pub offers European-inspired beers brewed by founder Brian Frisch. Frisch, who spent time fine-tuning his brewing skills while in Scotland and the Czech Republic will be pouring a limited keg of his Kölsch-style beer, a style originating in Cologne, Germany.
Coalition: One of Portland’s favorite new breweries, Coalition has been dedicated to being their neighborhood’s brewery. Allowing homebrewers to have a hand in recipe development under brewmaster Bruce MacPhee and assistant brewer/owner Elan Walsky, Coalition will bring a house favorite, their hoppy amber ale known as King Kitty Red. A deliciously balanced red, King Kitty begins with a sweet medium bodied malt profile, with light roasty notes from a german black malt, Carafa II. The sweet caramel notes are balanced with Amarillo and nugget hops in the front, and Willamette in back. A combination of Sterling and Amarillo hops used in the hop back give the beer its complex nose. 5.75% ABV 59 IBU.
Natian: Portland’s Nation Brewing is the brainchild of Ian McGuinness and Natalia Laird. Brewer McGuinness offers us a distinctly lupulin laden bold IPA known as Big Block IPA. Finishing out at 6.8% ABV, this new IPA has been a favorite of the brewer and he’s confident that you will feel the same.
Beetje Brouwerij: We’re so pleased to debut the beer of Portland’s newest brewery (this could change in a day/week the way they’ve been popping up here). Beetje (pronounced bay-cha) is the Belgian-inspired brewery from Southeast Portland of brewer Mike Wright. For Microhopic 2, Wright offers his Urban Farmhouse Ale, a light, easy drinking beer meant to quench your thirst. 5.25% ABV, 21 IBU’s. Made with Organic pilsner and 2-row malt and a pinch of crystal malt. Hops: Goldings, Hallertauer, and Willamette. Fermented with a Belgian farmhouse ale yeast.
Vertigo Brewing: No micro beer fest is complete without the quenching beers of Hillsboro, Oregon’s Vertigo Brewing. Soon to expand to a 7-bbl brewhouse, Vertigo has produced a mindblowing amount of beer on a 1-bbl brewhouse thus far. For our event at Bailey’s brewers Mike Kinion and Mike Haines bring an amped up version of their flagship Friar Mike’s IPA known as Friar Gone Wild. This Imperial IPA weighs in at about 8.5% ABV and a boisterous 114 IBU’s. Says Haines “We figured it only made sense to bring a macrohopic beer to the microhopic event!”
Microhopic 2.0 takes place on September 8, 2010 at Bailey’s Taproom (213 SW Broadway Street) in Portland, Oregon. Event starts at 4PM and lasts until the kegs are emptied.

Hope to see you there!
Posted by HumuloneRed

Email ThisBlogThis!Share to TwitterShare to FacebookShare to Pinterest
Labels: Festival