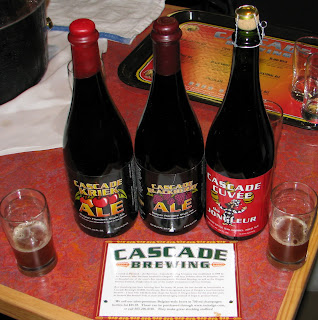 I spent the afternoon at a bottle tasting over at Cascade Brewing/Raccoon Lodge. I'd tried some of brewer Ron Gansberg's beers at the GABF this year and was very impressed by the beers that I'd sampled at their both, so I was looking forward to this tasting today. I was not disappointed as Ron was a very gracious host.
He pulled out all sorts of goodies including a 3 year old barley wine, a beer he was calling "Half Beer" which was Flanders Red blended with Cherries, and a beer I think he is calling "Shekar" (a sour spice strong blonde ale fermented with a "White Wine Grape") all of which were quite remarkable. Then he started pulling samples from the tanks in the brewery. 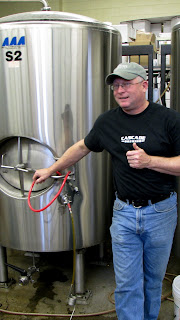 There we tasted some truly special beers like his wonderful Apricot Flanders and very tasty and well balanced blended that I can't remember the name of (I must have been drinking). I think it might have been called P’Quad. (Edit: Vlad the Imp Aler.)
Then we went into the walk-in cooler to have some Drie Zwarte Pieten “Sang noir” which will be served at the Holiday Beer Festival this year.


Cascade Brewing is a brewery to watch out for. There are some really good beers coming out of this little gem of a brewery. 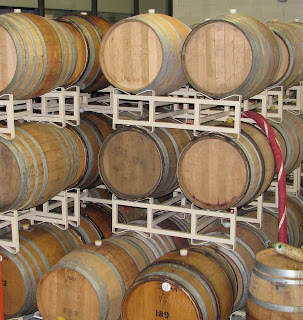 Not at all a bad way to spend a Saturday afternoon in Beervana I think!

Inquisitiveness ..............
I happen to surf through and look where I have landed!! At the time when you are naming a new drink as Shekar. Being inquisitive, can you tell what is the new brew called as!

Ron is definately a brewer that is operating outside the box and producing some of Portalnd's most unique beers. I have never had a bad beer (or even marginal) at the Raccoon !!!