This came in yesterday from our friends over at The New School Brew Blog. This should be a fun event! 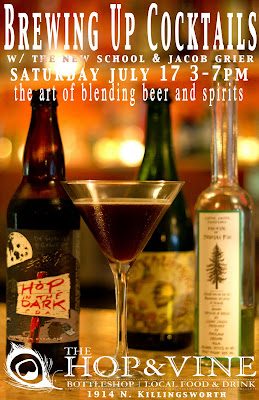 
1914 North Killingsworth Street
Portland, Oregon 97217
503.954.3322
For too long craft beer and spirits have remained separate entities only crossing in the occasional shot with a beer back. With Portland's well established craft beer culture and the rise of craft distilleries it is only right that these two should meet again with more tasty results.
While writers like Stephen Beaumont have been pioneering the blending of spirits and beer for awhile most lovers of either drinks are not familiar with what you can do when marrying them.
The New School, a newish beer blog/webmag has teamed up with experienced bartender/mixologist/writer and Bols Genever Brand Ambassador Jacob Grier to put on an event for Oregon Craft Beer Month aimed at turning beer drinkers on to the world of blending and spirits and vice versa.
On the menu for the party Saturday July 17 3-7pm is a unique line up of cocktails but I want to highlight one in particular the:
1. Cascadian Revolution
is a drink inspired by the recent rise of a new style of craft beer, the Cascadian Dark Ale or Black IPA. The beer style attempts to marry the qualities of NW IPA's in their citrusy and piney hop character and the dark roasted malt character of a Porter or Stout. The overall goal being for the beer to appear dark brown or black but taste deceivingly lighter and carry a dank, citrus fruit, pine hop notes.

The name Cascadian Dark Ale was proposed by Portland based beer writer Abraham Goldman-Armstrong who realized that the brewers who created the style were all based in the Republic of Cascadia. More info on that here:http://en.wikipedia.org/wiki/Cascadia_(independence_movement)
In creating the Cascadian Revolution cocktail we attempted to keep the goals of the beer style intact while creating something that you could only get out of a cocktail. The Cascadian Revolution uses local Clear Creek Distilleries Douglas Fir Eau de Vie in honor of the official tree featured on the flag of the Republic of Cascadia the Douglas Fir, it is complemented by a splash of Grand Marnier to bring out more of the orange citrus fruit so often associated with NW hops, for beer we chose to useDeschutes Brewing from Bend, OR's new Hop In The Dark Cascadian Dark Ale. These 3 ingredients are shaken and served in a martini glass and finally finished with the secret ingredient, a drop of pure Hop Oil.
Also on the menu is Stephen Beaumont's...
2. Green Devil. This drink is a strong one and is sure to kick some's ass in the middle of summer but it is too good not to share. Involving a glass rinse of Absinthe, 1oz of Gin and topped of with a bottle of crisp Belgian Golden ale Duvel.
Dry, fruity, spicy, sweet, boozy: all those words describe the resulting cocktail.
3: A drink based upon the current hot trend in the beer world Sour Beer. This cocktail will use one of the original makers of sours the Cantillon brewery and their Classic Organic Gueuze. The beer is made from a blend of 1, 2 and 3 year old oak barrel aged lambics. Mixed with Blackberry Liqueur, Gin, with 2 rocks and garnished with a fresh Blackberry.
4. An unnamed exclusive beer from local Upright Brewing's vault makes up the final cocktail.
Upright Brewing is known for their experimental farmhouse ales and this one is no different. Using the 'Four' a farmhouse wheat beer that is open fermented they then aged the beer in Hungarian Oak barrels with fresh Yarrow flowers and Rose Petals.
The cocktail marries those unique ingredient with Bols Genever Gin and Farigoule (a Thyme liqueur) to really make a refreshing and dry botanical blend.

For more information, photos etc. you can contact me,
Ezra Johnson-Greenough
The New School
503-757-6936
Posted by HumuloneRed