It's PIB time again which just adds to huge number of events taking place this weekend. The festival started Friday afternoon and is going through today (Sunday).  In the past I have really enjoyed this festival and although this year I was less excited about the international beers.  You see, the beers from around here are what I really get buzzed about (bad pun intended). Once again the local beers did not disappoint me. Cascade Brewing had a solid line up of "mystery" sours and as of yesterday Double Mountain still had Molten Lava (IIPA) and 2010 Devil's Kriek (sour ale made with fresh cherries). 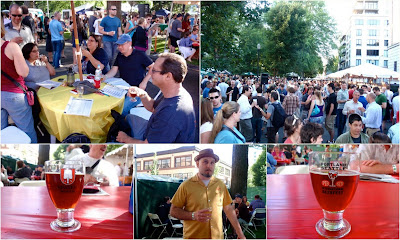 Don't get me wrong, there were some good imported beers at the festival as well, but most of them wasn't worth the price of a 4 oz. sample, in my opinion. Especially since they are mostly all available at one of the many fine bottle shop/beer bars around town at a much more palatable price point.

Among the festival "bargains" were great beers like Deschutes  Jubel 2010 (and then replaced by '09 Mirror Mirror) and Sierra Nevada '08 Bigfoot for 1 ticket. There were quite a few more 1 ticket gems but those are the one that come to mind.

I ended up going Friday until the crowds got to be too much and then again on Saturday because I had tickets left. It was not too crowded on Saturday until mid-afternoon at which point I had to leave anyway. Luckily we are having great weather to help us celebrate another PIB.  Overall, I had good time with great friends. But if I were going just for the beer I might have been somewhat disappointed.

Speaking of which, of course there were other problems. Check out Beervana and It's Pub Night blogs for some more coverage. They both touch on more of the problems going on with the festival. Hopefully the PIB will address these issues in the future.
Posted by HumuloneRed

Charles, I saw you in the crowd on Friday but we weren't in hailing distance. Nice to see the review!