I know it's all over the place but I had to mention it as well because I am huge supporter of Brewpublic. I going to try to make it to most or all (By The Bottle would be worth the drive but it's the drive back that's the problem...) : 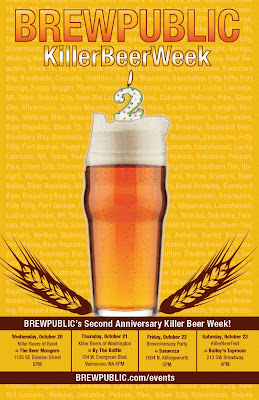 Brewpublic is pleased to announce the lineup of beers for this year's KillerBeerFest and celebrates 2 years with 22 awesome beers.

What: 22 special beers: one-offs, one-of-a-kinds, and other specialty styles running the gamut of flavor and complexity. This event is a highlight of Brewpublic's KillerBeerWeek (see attached flyer).

Why: All this to celebrate our love for beer that we share with our friends and the people who make craft beer culture here in the Pacific Northwest, especially Beervana, unsurpassed.

Where: Bailey's Taproom 213 SW Broadway, Portland, Oregon (these people are dear to us and share our passion for great beer)

Astoria
Blueberry Lambic
A special Belgian-style keg for this fruity beautiful purple colored beer has made its way to Portland from Astoria. Brewer John Dalgren employed a Wyeast blend to ferment out the beer and added 165 pounds of blueberries and an additional 3.5 pounds to each keg. Brettanomyces was added along with oak chips soaked in wine barrels and aged for five months.

Barley Brown’s
Trappist Strong Ale
Here is the first Belgian-style brew from one of Oregon’s most accomplished brewers, Shawn Kelso. Featuring a 2-row base with 60, 80, & 120 crystal malts along with some Munich Bonlander, a touch of rye malt and flaked oats. The hops are Simcoe to bitter and Amarillo for flavor. The taste is quite estery with hints of plums and dried dark fruit. This prototypical beer features bold depth and distinct mahogany color.  8% ABV, ~50 IBU.

Cascade
Beck Berry
This Northwest-style sour blends tripels and strong blondes that were lacticly fermented and aged more than a year with blackberries in oak barrels. Then, a secondary inoculation was done with a recently isolated plumbers strain of Brett called Beckamoyces Aasskraquii. Some sour cherries were blended in to give this beer some pucker.  This is a rare beer; once it¹s gone, it’s gone. 8% ABV.

Coalition
Liquid Sterling
Liquid Sterling is a both a single hop and a fresh hop common ale. Sterling hops were used throughout, with 100 pounds of fresh Sterlings in the back end to lend its unique taste and aroma.  A blend of 2-row and Vienna malt for the base give it a lagery crispness, with Caramunich and British Crystal malts used for to give sweetness and color.  4.8% ABV, 37 IBU.

Double Mountain
Killer Green Fresh Hop IPA
One of Oregon’s most beloved beers among hopheads, Killer Green features fresh Brewers Gold hops from Sodbuster Farms in Hopmere, Oregon. The base brew for Killer Green is a nice hefty IPA recipe, featuring a toffeeish malt character and enticingly earthy orange-hued color. The mouthfeel is rich and resinous, the flavors a complex mix of sweet, spicy, herbal and fruity; the finish is long and memorable, with a smooth yet powerful bitterness. In a word — Killer! 7.2% ABV, 83BU.

Fort George
Kentucky Coffee Girl
A special batch of Fort George’s Coffee Girl Stout, an imperial stout dry hopped with eight pounds of Ethiopian Halle Sclassie Sodamo coffee beans. The beans give a bit of a fruity taste along with hints of cardamom, cream, ginger and caramel. This batch is a perfect blend for our coffee girl beer that has a strong malty and chocolate taste. The beans have been sitting and aging with the beer aged in bourbon casks. 9.5% ABV.

FiftyFifty
Totality Imperial Stout
California’s lone brew at this event, Truckee’s FiftyFifty brewing was kind enough to part with this truly killer Imperial Stout that is ‘to die for.’ Brewer Todd Ashman calls it a “good 'ol Impy Stout.”  It is the base beer for the brewery’s high regarded and ultra rare Eclipse. 9.5% ABV.

Laurelwood
Bay Laurel Ale
Loaded with a plenitude of malts and hops, Laurelwood Brewmaster Chad Kennedy says this beer is “One of the more unique beers we’ve created.” This pale ale is made with six different malts including, barley, rye and wheat as well as four varieties of hops. To make it even more exciting, the beer contains fresh Bay Laurel leaves that were added in the fermenter and conditioning tank “a balanced pale ale with the pleasing aroma of fresh bay leaves- quite distinct from the dried version.” 5.7% ABV, 40 IBU.

Mt. Tabor
Sibeerian Bull Imperial Stout
From one of our favorite new breweries to rear its head in 2010 comes this Russian Imperial Stout inspired by cold Russian winters and our fresh Bull Run water supply. Sibeerian Bull is a big, hoppy stout capable of delivering that knock-out blow. 10.8% ABV, 100 IBUs.

Ninkasi
Oak-aged Total Domination
Citrus and malt interplay to make this NW Style IPA. 6.7 % ABV, 65 IBUS. We used Pinot Noir casks from King Estate Winery. The color was pulled from the wood for us leaving a neutral wood to work with. The casks were dry hopped three separate times. Once, with Crystal hops, then Amarillo, then Northern Brewer.  We also added three different additions of wood chips at the time of dry hopping. French Dark Roast Oak chips, then Light Medium Hungarian Oak, then Light Fresh American Oak.  The casks were topped off with more Total Domination, twice sent through the centrifuge and carbonated.

Lucky Labrador
Force of Nature
Here is a Pinot barrel aged imperial pale ale that melds chewy robust maltiness, bold Northwest hops and a mildly tart and fruity flavors brightened and given life by the wood. When it comes to killer beers, Lucky Lab knows how to help throw a party. 9.5% ABV, 85 IBU.

Pelican
Full House Imperial Brown
While celebrating our win of three Gold medals, two Silver medals and Large Brewpub of the Year at the 2006 Great American Beer Festival, one of our fans said, “Three golds and two silvers, that’s a full house!” This huge win inspired our brewers to come up with a celebration beer, and the Full House was born! Full House has a dark red-brown color, a solid foundation of caramel and cocoa-like chocolate malt, and a pronounced floral Northwest hop character. Full-bodied and full of flavor, Full House finishes clean, balanced, warming and satisfying. 8.3% ABV, 60 IBU.

Prodigal Son
Bruce/Lee Porter
Rich and chocolate-y with a strong coffee flavor. This is a robust porter not for the faint of heart. Composed of five different grains, the porter features specialty malts from four different countries. Vieena and melanoidin malts provide the backbone behind the strong roasted character. 7.5% ABV, 36 IBU.

Upright
Cask Four with Rose Petals
Brewers Alex Ganum and Gerritt Ill set aside this special batch of Four with the infusion of rose petals picked in Alex's yard. The Four base is a recipe that uses a good portion of wheat and incorporates a sour mash into the process to make it slightly tart and extra refreshing. It has delicate aromas and flavors that span a range of floral, grassy and herbal notes. The finish is extra dry and makes the beer a great beverage to pair with food, especially various cheeses and shellfish. Malts: Organic Pale, Organic Wheat, Organic Munich Unmalted: Rolled Wheat Hops: Hallertauer Mittelfrüh. 4.5% ABV.

Vertigo
Midnight Harvest VSB
This year we will be bringing our Midnight Harvest beer again.  Only this year we brewed an Extra Special Bitter known as Vertigo Special Bitter, or VSB.  Brewer Mike Haines says “The hops again came out of my backyard and there were only enough to brew about 1 barrel.”  This means the beer is exclusive to KillerBeerFest.

Walking Man
Hop-Along Fresh Hop IPA
You may have been fortunate enough to try this beer at one of the regional fresh hops fests, but Bailey’s Taproom is pouring the only keg at a Portland pub. Hop-Along is a fresh hop IPA using Cascades from Roy Farms in Yakima. A light and crisp malt backbone let's the hops be the showcase. Brewer Jacob Leonard says “We used Gambrinus ESB malt for the base and some light caramel malts for the specialty malts as well as flakes barley to lighten the mouthfeel. It has a wonderful peachy aroma mixed with some pine and a nice chewy hop flavor.” 6.9% ABV, ~60 IBU.