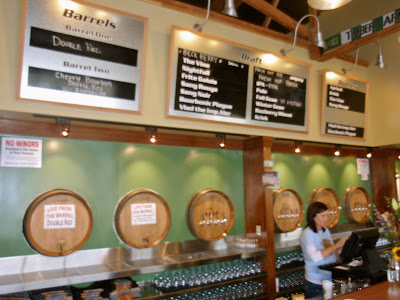 I was out early on Tuesday to get my OLCC server's permit and decided to head to the Cascade Barrel House afterwords. This was my third trip the Barrel House, so it was about time I posted about it.
The first beer I had was the Frite Galois. Here is the description of the beer from the menu:
Frite Galois
Frite Galois: 4.6% ABV / $4.50 Teardrop
This light farmhouse ale was aged for three months in white port barrels that were previously used to age our Noyeaux. This is a nice crisp sour beer with a trace of influence from the Noyeaux.


I found it to be light and refreshing with a nice but not overwhelming sourness to it.
Every Tuesday the Barrel House taps 2 different barrels for their "Live Barrel" Series. The next beer I had was from a barrel that was tapped the previous Tuesday called Cherry Bourbon Double Red (w/ Bourbacide).  This beer has a wonderfully delightful nose of cherries, chocolate, and bourbon with a sour and earthy finish. It reminded me of chocolate covered cherries (with bourbon, of course).


While I was there Cascade Master brewer Ron Gansberg came over to chat with me. We ended up having a great conversation about two of my favorite things, beer and barbecue after which he asked if I would like a tour. Well of course I did!

Here are a few pictures of the Barrel House. Thanks for the tour and great beer Ron! I can't wait for my next visit.