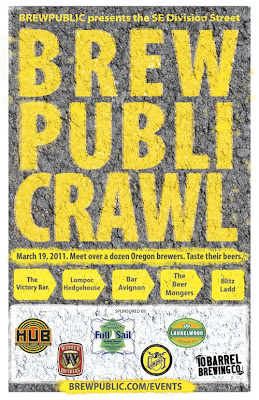 More than a dozen Oregon brewers and their beer will be available at Brewpublic's 2nd annual Meet the Brewers Pub Crawl.

Beervana, Portland, Ore. March 4, 2011 - Brewpublic is excited to announce the second annual SE Division Street Meet the Brewers BrewPubliCrawl, the original Oregon meet the brewers pub crawl. It’s taking place on Saturday, March 19, 2011 from noon to 7:30PM. Like last year’s inaugural event, the 2011 event will feature special Oregon brews on tap with brewers in the house to talk about their creations.

The venues for this year’s event will again include some of SE Division Street’s best craft beer spots: Victory Bar, Lompoc Hedge House, Bar Avignon, Beer Mongers andBlitz Ladd. Participating breweries include: 10 Barrel, Alameda, Barley Browns, Block 15, Beetje, Burnside, Cascade, Coalition, Double Mountain, Fort George, Full Sail, Hopworks, Laurelwood, Lompoc, MacTarnahan’s, Migration, Southern Oregon, Upright, Widmer, and more!
To cut the lines and help the bars serve crawlers easier, tokens will be sold at each venue which can be exchanged for the special Crawl beers during each stop. Brewpublic volunteers will be on hand at each venue to sell tokens.
Event Cost: $12 includes all access wristband and ten drink tokens. Event wristband gets you access to the special deals on special brews available at each location and entry into the raffle for beer gear. Additional tokens can be purchased at each location for $1. Entry and token purchase is CASH ONLY. ATM locations will be provided in the crawl guide.
The current schedule is:
Noon – 1:30PM: Victory Bar
Hopworks, Double Mountain, Breakside, Oakshire
1:30 – 3PM: Lompoc Hedge House
Specialty and exclusive brews from New Old Lompoc
3 – 4:30PM: Bar Avignon
Full Sail, Fort George, Upright
4:30 – 6PM: The BeerMongers
Barley Brown’s, Block 15, Migration
6 – 7:30: Blitz Ladd
10 Barrel, Alameda, Burnside, Beetje, Cascade, Coalition, Laurelwood, Lompoc, Ninkasi, Southern Oregon, Widmer, and more!
Brewpublic encourages all crawl patrons to drink responsibly and never drink and drive.
Further, we are pleased to announce our partnership with Brewvana Brewery Tours who will be providing shuttles to and from the Crawl. The schedule is:
Pick up at Plew’s Brews (8409 N. Lombard, St Johns) 11AM
Pick up at Saraveza (1004 N. Killingsworth) ~11:30AM
Pick up at Concordia Ale House (3276 NE Killingsworth) ~12Noon
Pick up at Laurelwood Pub & Brewery (5115 NE Sandy Blvd) ~12:30PM
The Brewvana Brewery Tours Shuttle will return to the above locations as well as the Jupiter Hotel at the following the below final venue departures:


Discounted rooms will be available at the Jupiter Hotel (800 East Burnside). If you are interested in staying  here at the special Brewpublic rate, use codeword “BEER” when booking. For room reservations call (503) 230-9200.

About our event sponsors:

Full Sail Brewing Company – Independent and employee-owned, the Full Sail Brewery is perched on a bluff in Hood River, Oregon, overlooking the most epic wind and kite surfing spot in the world. At this very moment their specialists in the liquid refreshment arts are crafting barley and hops into your next beer. Swing by and sample their awarding winning brews, grab a bite, and soak up the view. Guided brewery tours free of charge daily at 1, 2, 3 and 4 p.m. Open Daily @ 11:30 a.m. Serving Lunch and Dinner.
Hopworks Urban Brewery - Hopworks Urban Brewery (HUB) is Portland’s first Eco-Brewpub. HUB offers an assortment of award winning, world-class beers made from organic malts and locally-sourced hops on draught and in bottles across the Pacific Northwest and at the brewpub on SE Powell Blvd. In early summer, Hopworks will open its second location, Bike Bar, on N. Williams, expanding the company’s love of beers, bikes and the environment.
Laurelwood Brewing Company – “Since our opening in 2001 Laurelwood Brewing Co. has been committed to sustainability. Brewing Portland’s first certified organic beers, all of which are made with Pacific NW organic malt and regionally sourced grown hops. The brewery is certified organic by the Oregon Tilth and all of our water use is offset by credits from the Bonneville Environmental Foundation. The breweries spent grain and yeast are used as animal feed while the spent hops are composted. As native Pacific Northwesterners, our pubs are committed to using local farmers, purveyors & to support the sustainability and organic movement.”
For more details about this event and other Brewpublic functions, please contact Angelo @ Brewpublic (dot) com. (503) 449-4522. Cheers!


Last year's pub crawl was a blast! We are looking forward to this one!
Posted by HumuloneRed