Anybody who knows me (or has read older post in this blog's archives) knows my wife and I are originally from Texas. We moved here almost 3 years ago and finally had our first tasting in our Portland home last Saturday. We decided to have a Texas tasting after our friend Margaret Lut of Brewpublic and Ladies of Lagers and Ales (LOLA) fame spent a week in Texas for work. She brought back some beers from some of the newer breweries in the state and had mentioned the idea of having a Texas tasting. My wife Teresa, a fellow LOLA member, offered to have the tasting at our house. This gave us an opportunity to raid our cellar of some of our aged Texas beers we had amassed over years like several vintages of Real Ale Brewing Sisyphus Barley Wine and Saint Arnold's Brewing Divine series.

Below is a collage and a slide show of pictures we managed to get throughout and after the party. 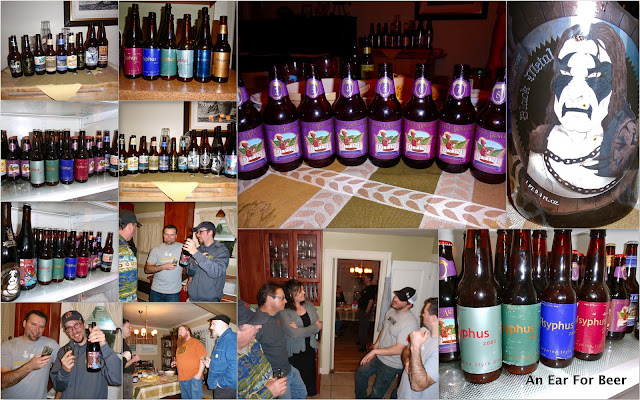 Angelo over at Brewpublic has more details of the beers we tasted in his Weekend Review post. Check it out!

Thanks to everybody who came and brought beer and food. A special thanks to Bill of It's Pub Night (who also moved to Portland from Texas) for the great homemade salsa and to Wildwood Sous Chef Paul Kasten for cooking up some kick-ass smoked pepper vegan chili!
Posted by HumuloneRed

Thanks for the invite Charles. Good times