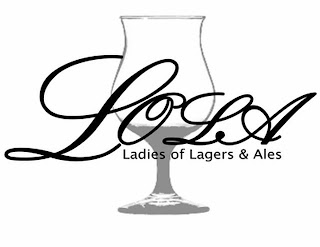 Just a quick post about the LOLA Kölsch Release Party tonight at the Lucky Lab Beer Hall at 1945 NW Quimby starting at 4:30pm.
Here are some details on the beer and LOLA as written by LOLA founding member Margaret Lut:
This brew is a first for the Ladies of Lagers and Ales (LOLA) crew with no less than a dozen women breaking a sweat on a sunny day in April at the Lucky Labrador Beer Hall on NW Quimby. Under the watchful eye of Lab Brewdog Ben Flerchinger, this beer was brewed with Golden Promise and flavored with Munich, Wheat & Honey malt. Then CTZ hops were added for bitterness and Fuggles for aromatics. A Kölsch yeast was used to give it a bready, lemony, and mildly dank character. This beer was brewed by the ladies to be enjoyed by everyone!
About LOLA: Started by Margaret Lut in 2010, when she got together with friends and realized other ladies may want to joing them.  LOLA is a social group made up of females that enjoy craft beer, including people working in the industry, homebrewers and craft beer drinkers.
Check out some of the great pictures Margaret posted on Brewpublic of the brewing of this beer.
Hope to see you there!
Posted by HumuloneRed

Sorry Lola's, but that is most certainly not a Kolsch.

Anonymous-You are correct. Even if it had the correct ingredients it still would not technically be a Kolsch seeing how it was brewed in NW Portland and not Cologne, Germany. But as a proud husband of a LOLA member and a craft beer enthusiast I'm going to enjoy the beer anyway no matter of style or name.