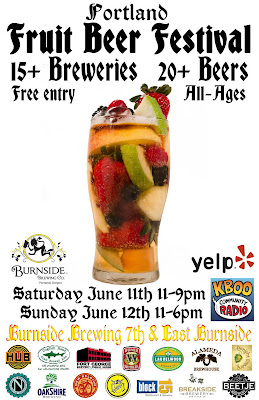 
Breakside Brewing: Mango IPA
Our flagship IPA brewed with a twist: we tweaked the recipe on our best selling beer to suit it to the flavors of fresh mango. Mango additions in the mash, kettle, hopback, and conditioning tank allow this otherwise-mellow fruit to complement and enhance the Citra, Cascade, and Ahtanum hop profile of this IPA. OG: 1.063 FG: 1.010 ABV: 6.8% IBU: approx. 55

Burnside Brewing: Gooseberry Berliner-Weisse
A slightly tart wheat beer with a mild fruitiness. This brew is lowly hoped ( 2ibu's ) and fermented with a lactic bacteria in addition to the German ale yeast resulting in the slightly sour finish. A percentage of this beer was put into french oak barrels and aged with 50 pounds of Washington grown Gooseberries. ABV: 3.35% IBU'S: 2.1

Dogfish Head: Festina Peche
A refreshing neo-BerlinerWeisse fermented with honest-to-goodness peaches to (get this!) 4.5% abv! Because extreme beers don't have to be extremely boozy!

Fort George Brewing: Badda BOOM! Cherry Stout
Coming in at 6.9% abv, rich and dark as a moonless night in the orchard, Badda BOOM! has 40 pounds of raspberries and Cherries mingling famously with the Belgian yeast esters and black barley bitters.

Oakshire Brewing: Blind Date
An Oat Brown Ale made with Organic Dates
Blind Date is a medium bodied Belgian Brown Ale with a balanced bitterness from Calypso Hops.  It is crafted with juicy Organic Dates. It has hints of fruit, a touch of roast and a smooth silky texture from the oats. The beer finishes with a mild sweetness from the dates. 6% Abv

Upright Brewing: Barrel-Aged Pure Wit with Orange
A single cask version of our seasonal Belgian-style wit with a pound of dried sweet orange peel added to the barrel. This tart and hazy wheat beer has a tremendous nose but remains light and snappy on the palate. 4.5%

Upright: Gin Barrel-Aged Four with Strawberries
Upright's flagship wheat beer aged with Oregon strawberry puree in a Ransom Distillery Old Tom Gin barrel. The otherwise straightforward brew picks up a mix of the fruit character and the unique botanical notes that only come from the one of a kind local gin casks. 5%

Hopworks: Chili infused Survival Seven Grain Stout
Hopworks Head Brewer Ben Love added a unique blend of chili peppers to 3 small kegs of their Survival Seven Grain Stout. Each keg picked up its own flavors off the different peppers isolated. Those kegs were later blended to taste for the ultimate chili pepper infused stout made just for the Portland Fruit Beer Festival.

Lompoc: Cherry Fechter:
Our Fools Golden fermented in a Maryhill Vineyard Cabernet Franc barrel with 35 pounds of sour cherries. It is clean crisp with a bright pink color and a slight sourness in the finish.

Coalition: Wheat from the Tree
An American style wheat aged 2 months in a St. Josef's chardonnay barrel, this beer has light notes of bartlett pears and wine grape, with a sweet and tangy finish of fresh mandarin and tangelo.  Starting at 4.4% abv, this beer spontaneously fermented to ~5.2% with the addition of 60 lbs of fresh fruit.

LOLA/Lucky Lab: Cherry Kolsch
This brew is a first for the Ladies of Lagers and Ales (LOLA) crew with no less than a dozen women breaking a sweat on a sunny day in April at the Lucky Labrador Beer Hall on NW Quimby. Under the watchful eye of Lab Brewdog Ben Flerchinger, this beer was originally brewed with Golden Promise and flavored with Munich, Wheat & Honey malt. Then CTZ hops were added for bitterness and Fuggles for aromatics. A Kölsch yeast was used to give it a bready, lemony, and mildly dank character.

Cherry LOLA is the side project of the LOLA Kolsch. Five gallons of LOLA Kolsch were kegged off and conditioned with black cherry juice for a delightfully sweet and mildly tart flavor.
This beer was brewed by the ladies to be enjoyed by everyone!

Cascade: Apricot
Our Apricot has the intense aroma of Goldrich and Rival apricots, slow-ripened before being introduced to the beer. Based on a Belgian Tripel, this beer went through 16 months lactic fermentation and aging in French oak wine barrels, then rested on the fruit for four months before finishing. 8.5% ABV

Double Mountain: Devil’s Kriek
It is with great pleasure that we brew Devil's Kriek once a year at cherry harvest, and let it develop its intensity for a full twelve months, until it's time to do it again. This year's batch is intensely dark and fruity, thanks to over 70 lbs. per barrel of Bings (twice what we used last year) from Matt's orchard in Odell. The light sourness comes not from sour cherries, but from Brettanomyces "wild yeast", which slowly add the tang and a host of other funky flavors. A brown ale base provides a tasty counterpart to the fruit. 8.3% ABV

Breakside: Brewer’s Bramble
Inspired by the classic bramble cocktail, this beer was aged in an Old Tom Gin barrel with blackberries, lemon peel, and juniper berry.

Breakside: Whiskey Ginger
This beer finds its origins in a cocktail called Six Lengths Ahead, which was on the original drink menu at Portland’s cocktail hotspot Beaker and Flask. This beer also aged in a Whippersnapper barrel and has blueberries, fresh ginger, lime peel, and a touch of grenadine.

He’ Brew: Origin Pomegranate Ale
Brewed with the juice of over 10,000 luscious pomegranates, ORIGIN is a complex, rich and balanced Imperial Amber Ale with a truly unique character. The pomegranate juice is added during fermentation, leaving only the residual sugars, which serve to balance the hop bitterness. 8% Abv


Here is a rough tapping schedule of the Rare Fruit Beer kegs as posted yesterday evening on the festival's Facebook page:
Ok here is the very rough rare beer tapping schedule. How fast we go through these is another story so we may get ahead of our sched or behind it but this is the tapping order. We will have 2 on tap at a time unless another jockey box frees up to tap more. Follow us on Facebook or Twitter for the live updates on taplist changes:
Tapping at 11am on Saturday 6/11:
Coalition Brewing: Wheat from the Tree (Chardonnay Barrel-Aged with Bartlett Pears and Tangelo)
Breakside Brewery: Whiskey Ginger (Whiskey barrel-aged with Blueberries, Lime Peel, Ginger and Grenadine)
Next Up:
Burnside: Marionberry Berliner-Weisse
Cascade: Apricot Ale
Hopworks: Chupacabra Chili Stout
Lompoc: Cherry Fechter
Double Mountain: Devil's Kriek
Cascade: Kriek
Fort George: Hellcat (Belgian Pepper Ale)
Oakshire: Gin Barrel-Aged Imperial Stout with Blackberries
Tapping at 11am on Sunday 6/12:
LOLA & Lucky Lab: Cherry Kolsch
Next Up:
Upright: Gin-Barrel-Aged Four with Strawberries
Breakside: Brewers Bramble
New Belgium: Peach Love
Widmer: 09' Cherry Oak Doppelbock
Block 15: La Ferme de Demons
He' Brew: Origin Pomegranate Ale
Go to http://burnsidebrewco.com/FruitBeerFest.php for more details on the festival.


Here are some great posts on the subject with some great information from other Portland Bloggers:


It's Pub Night
Brewpublic
portlandbeer.org
Beervana
Not So Pro Beer Blog
Portland Beer and Music
And of course the organizer's guide to the fest:
The New School

Hats of to Ezra Johnson-Greenough and the folks at Burnside Brewing for pulling all this together. Judging by what I've seen (and tasted), it's going to one a hell of festival!

I hope to see you there. I'll be pouring the Rare Fruit Beers 1st shift on Sunday. Come by and say hi.
Posted by HumuloneRed