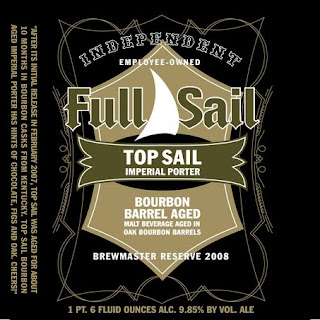 Okay, since I have been getting so much shite from my friends (mostly blogger friends) I'm going to knock out this post out while it is still fresh in my mind even though I don't have any pictures (yes, once again I forgot to bring my camera and I didn't even use my iphone camera. I know, lame).  But that is okay because  I  know a few of  did take some pictures. Maybe I will "steal" one...

I got to the Full Sail Brewery at Riverplace a little early to find a table since I knew of there were a few other people coming. Ezra was already there and had secured a good size table for all of us (thanks Ezra!).  Soon after were joined by Derek,  Bill, and "SNOB" Ritch.

For reasons that Bill explains in his report of the event here, this year's Top Sail release party featured a horizontal tasting of single-barrel versions of this year's Top Sail Imperial Porter. They aged the beer in three different whiskey barrels: Maker's Mark, Stranahan's (out of Colorado) and Four Roses.

Like Bill, my favorites were the Maker's Mark and the blended versions. The blend seemed to have the most bourbon character while the Maker's Mark to me had the more smooth and balanced flavor with a good amount of vanilla notes. With that said, I did like the Stranahan's quite a bit. (I think Ritch liked this one the best.) To me it seemed to have the most "spicy" character of all the samples. The Four Roses was my least favorite. I think it had the least amount of bourbon flavor of all with a pretty dry finish.

Later on we sat around drinking beers and were joined by Kerry and Ken of Taplister.  At some point in the evening  Full Sail's John Harris was nice enough to bring our table samples of the 2004 and 2008 versions of Top Sail. Both of which I really enjoyed, but I would have to say the 2008 was the better of the two.

I should also mention that the Full Sail's Riverplace Brewery (a.k.a The Plisner Room) has a happy hour menu with great food special which makes sense seeing how The Pilsner Room is connected to McCornick & Schmick's Harborside at the Marina next door.

Overall,  I really enjoyed the horizontal tasting and had a great evening. Kudos to Full Sail Brewing for putting this event on!
Posted by HumuloneRed

That was a good time! I have a blurry photo of Ezra and Ritch with a row of samples I can email you if you need it.