If you like Double (or Imperial) IPAs like I do you're going to want to check this out! This event is put on by my good friends at Saraveza and Brewpublic. Last year's IIPA Fest was crazy fun with a great line up of beers. This year's line up looks even better! 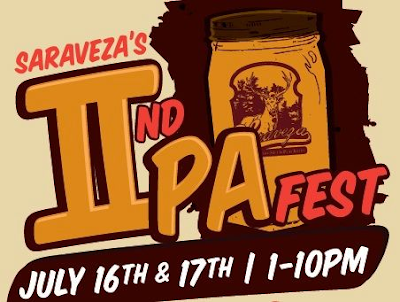 PORTLAND, ORE. -- SAT & SUN, July 16-17th, 1-10pm: With over 20 rotating IIPAs on draft including fest special brews and a tapping of our staff’s first beer, team Saraveza and Brewpublic present to you our 2nd Annual IIPA Festival! Join us July 16th & 17th for lots of hops, housemade B.B.L.T.s (yes, that’s Bacon Bacon) and live music. Look for your “free jar” tickets the week before the festival. IIPA FEST entry is $15 for 8 tickets and 1 mug; or $25 for 16 tickets and 2 mugs.

This year's event reveals some one-of-a-kind Imperial IPAs exclusive to this festival, as well as many rare and sought after specialties.
Here's the list so far:

Saraveza, one of Beervana's top destinations for craft beer, is located at 1004 N. Killingsworth St. in sunny Portland, Oregon.