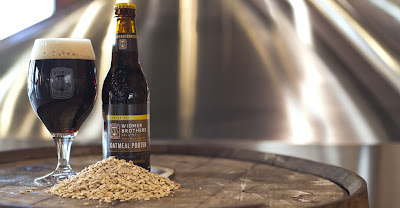 Widmer Brothers Brewing Releases Oatmeal Porter
Expands Series 924 With First of Three Limited-Release Beers
PORTLAND, Ore. – Feb. 28, 2012 – Widmer Brothers Brewing is expanding its Series 924 with the introduction of Oatmeal Porter, the first of three limited-release Series 924 beers that will be unveiled in 2012. Joining the two year-round Series 924 offerings, Pitch Black IPA and Nelson Imperial IPA, this rich porter was brewed with custom-toasted oats made specifically for Widmer Brothers by Briess Malting of Chilton, Wis. The oats, which have appropriately been dubbed “Bro-Oats,” contribute to the beer’s velvety mouth feel and distinct nutty flavors.  Hints of caramel and toffee give this brew a touch of sweetness, complemented by mocha aromas and a smooth finish. Oatmeal Porter is now available in four-packs of 12-ounce bottles, in 22-ounce bottles and on draught nationwide.

“Oatmeal Porter is a great addition to Series 924, as it really adds balance to Nelson Imperial and Pitch Black as part of the series,” said Ben Dobler, a Widmer Brothers brewer. “We loved the idea of brewing a beer with a custom-roasted oat blend, but rather than brew the more popular oatmeal stout style, we wanted something a little different – and Oatmeal Porter turned out great.” 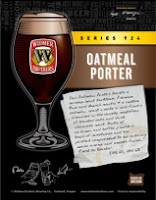 Widmer Brothers Expands Series 924:
Widmer Brothers’ Series 924 was launched in 2011 with the intention of offering special, but accessible, high-end craft beers. Series 924 is named after the address of Widmer Brothers’ brewery building: 924 Russell Street in Portland, Ore. Established as a place for those who share a love for the art of brewing and the taste for great handcrafted beers, 924 is where brewery co-founders Kurt and Rob Widmer built a home for creative craft brewing. It’s where Widmer Brothers’ brewers brew without boundaries in the pursuit of the perfect pint, and where beer lovers come together to share and be inspired by every batch.

To date, Series 924 has included two year-round offerings: Nelson Imperial IPA and Pitch Black IPA. In an effort to showcase some of the most innovative of its brewers’ creations, Widmer Brothers Brewing is expanding Series 924 to include three additional limited-release beers. The beers will be released at different points throughout the year, beginning with Oatmeal Porter.

About Widmer Brothers Brewing
What started as a dream for two ordinary brothers who just loved beer has now become a reality for two ordinary brothers who still just love beer. Kurt and Rob Widmer helped lead the Pacific Northwest craft beer movement in 1984 when, in their 20s, they dreamed of brewing unique interpretations of traditional beer styles. In 1986, Widmer Brothers Brewing introduced the first American-style Hefeweizen; today, the unfiltered cloudy beer is the company’s signature brew and one of the best-selling wheat beers in the country. Based in Portland, Ore., the brewery currently brews a variety of beers including Drifter Pale Ale, Nelson Imperial IPA, Rotator IPA Series, Drop Top Amber Ale and Pitch Black IPA. For more information about Widmer Brothers Brewing, visit www.widmerbrothers.com.