Upright Brewing is three years in! To celebrate, come join us at the brewery Friday the 30th from 4:30 to 9 pm and check out our newest seasonal beer, Blend Love! In just 3 years Upright Brewing has created a mind numbing amount of beers and helped to bring Saisons and Farmhouse-style Ales back into style. Owner/Brewer Alex Ganum is known for his food oriented style of brewing and for his barrel-aged wild ales and fruit beers. There may be no beer more quintessentially Upright Brewing than the latest release 'Blend Love' which is set to become the breweries annual anniversary bottle release and is a tribute to fellow brewer Ben Love. 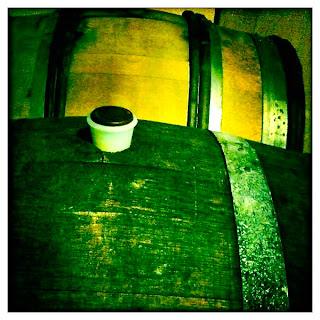 Four casks containing a sour cherry version of the Four were blended with about a cask and a half of raspberry laden Six to create this characterful sour ale, full of lactic and acetic character, fruit and oak tannins, and a light funkiness from brettanomyces yeast. It was a blast to produce and then name this beer after one of Upright's favorite people and brewers, Ben Love. It's perfectly ready to enjoy now but will cellar well for several years. One keg will be on tap along with plenty of bottles for sale at $12 a 750ml and $125 a case. Please note there will be a single case per person limit. During the anniversary on the 30th, expect to see some other neat beers on tap as well!
Posted by HumuloneRed No comments: