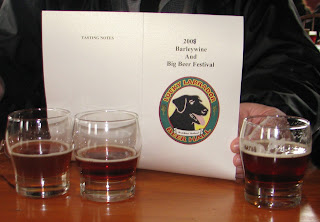 This weekend was the Luck Lab Barley Wine and Big Beer Festival down at the Luck Lab Beer Hall on NW Quimby St.  It was a 2 day event that went from noon to 10 PM both Friday and Saturday. My wife and I were able to get there Friday night and then on Saturday our friend Marc took us there again Saturday afternoon.
Friday night was pretty crowded  as was later in the afternoon on Saturday.  They had started running out of vintage beers on Friday and by Saturday the list was of "Out" beers was getting pretty long.  So really your best bet was to look up at the signs to see what was available. As with most festivals getting there earlier pays off. 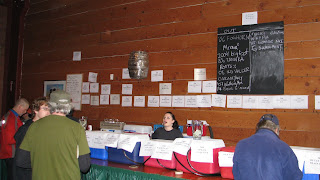 Looks like we had perfectly complementary experiences: I was there early Friday and late Saturday.

Also, I tried exactly 2 of your favorites! And only a sip of the Three Creeks, since it went on just as I was leaving Friday.

Someone told me the Pelican had an off taste, now I wish I'd tried it. I've loved it in the past. What was it like?

Why didn't the Lab publicize this event? We patronize the Hawthorne LL regularly, and there wasn't a sign, a poster, anything. And nothing on their website.