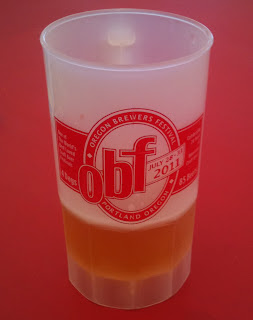 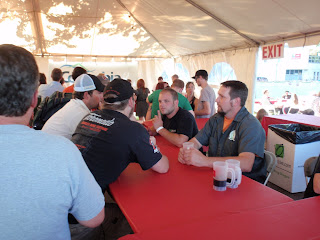 Day 1 of the Oregon Brewers Festival is done. I chose to forgo the media preview and instead I spent a lot of time in the Buzz Tent trying beers and visiting with the brewers at the table they have set up on the north side of the tent which is great way to meet the brewers that brewed the beer you're enjoying.

The rest of my time I focused my attention on trying beers in the South Tent. These were a few of my favorites (beer descriptions by Gary Corbin): 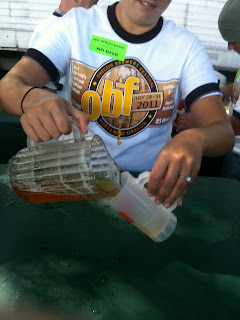 Oakshire Brewing - Daily Dose Summer Ale - Oakshire draws its malt bill from across the gamut: Rahr 2-row, Castle Pilsner, Briess Carapils and Great Western Munich. By contrast, the hop bill is simple: a light dose of Nuggets in the boil and two shots of Amarillo in the finish. To complement the hops, the brewers added orange, lemon and grapefruit peel and some hibiscus flower and lemongrass for a light, crisp brew with a slightly fruity note.

Upright Brewing - Offen Weisse - This all-organic beer uses Gambrinus Pils and Great Western wheat and Munich malts and a single variety of all-organic hops (can you guess what it is?). It's fermented with a classic Bavarian Hefeweizen yeast strain yielding a spicy and fruity, dry and slightly tart brew that's low in hops and long on thirst-quenching.

FiftyFifty Brewing - This sweet, inky brew will give your palate something different to chew on than the hop monsters next door. Eleven different grains (including hand-toasted oats) and a dose of molasses provide its rich flavor and body. Three shots of hops give it just enough bitterness and hop flavor. If the Donner Party would have had this, there would have been no problem surviving the winter's cold.

Widmer Collaborator - Hopfinium is the union of a relatively dry Pacific Northwest style IPA with the clean fermentation characteristics of a proper German lager yeast - an India Pale Lager -  thus allowing the focus to be entirely upon the abundant hops, rather than be muddied by the esters of an ale yeast.  Expect a crisp finish and clean bitterness under the dank citrus-tangerine flavor and aromas of Cascade, Summit and Simcoe hops.

Black Diamond Brewing - This beer is mostly about the yeast and spices used - a White Labs Saison Yeast blend allowed to ferment warm in a base of Pilsner, wheat, aromatic, Munich and Crystal malts, with some turbinado sugar to lighten the mouthfeel.  Big aromatic spices hail from cardamom seeds and ginger ground at the brewery along with both bitter and sweet orange peel added in the last 10 minutes of the boil.

Now I'm going to head down to the fest and check out the North Tent. Then later treat my wife and myself to the Block 15 Brewer's Dinner at Wildwood.

For more coverage on the fest check out these fine blogs:

The Not So Professional Beer Blog