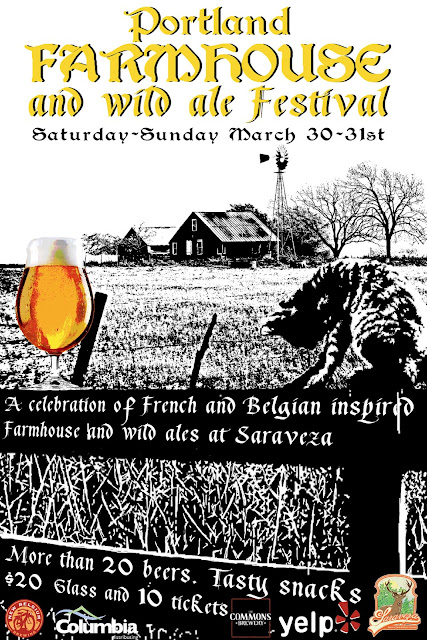 The Portland Farmhouse and Wild Ale Festival debuting March 30th and 31st at Saraveza and neighboring Bad Habit Room is excited to announce our diverse taplist. Increasing from the initially planned 20+ beers to now over 30 farmhouse and wild ales from across the country.

During the festival Saraveza will be offering a special "Farmhouse Cheese Plate" put together by Steve Jones of Cheese Bar and Saraveza's wonderful kitchen staff as well as offering a food special or two that will pair well with the beers.


On opening at 1pm on Saturday March 30th an initial list of 20 beers will be available at either Saraveza's bar or the Bad Habit Room with the other 11+ beers rotating in over the 2 days of the festival as kegs kick. Tickets are on sale now for $20 which includes a commemorative Farmhouse Festival glass and 10 drink tickets good for a 4oz sample of beer (some beers are more expensive and cost 2 tickets per sample). You are encouraged to purchase tickets here before they sell out. Sales day-of will be CASH ONLY if there are glasses left.

About Saraveza:
Derived from the owner’s name and the Spanish word for beer, Saraveza Bottle Shop & Pasty Tavern is a place to celebrate craft beer, eat well and enjoy friends and strangers alike.  We’re a North Portland watering hole and craft beer convenience store w/ 250+ bottles and 9 rotating taps. Whether you’re new to the brew scene and need some guidance or an old pro just looking for something rare, Saraveza’s beertenders will find a flavor that works for you.

It is funny, but there are way more French - or French style inspired - beers on that list then are available in France itself. God Bless you Portland for keeping the craft alive.

CHEA NIKE HYPERDUNK this time using the DYNAMIC FLYWIRE exposed abnormality to enhance the toughness. FLYWIRE is formed by high density nylon fiber coupled with made linear distortion method, after across the shoelaces , durability have been improved. This series of shoes have enough space for the feet, not grinding, it's bradeyseism technology used the Lunar moon technology. CHEAP NIKE HYPERDUNK is one series of these shoes and it is specially designed for the best players in the world, with unmatched lightweight performance. In our online store, we sale all kinds of they are all high quality and low price with special fast shipping.http://www.cheaplebronxi.com

It is my pleasure coming across your site earlier this week. I came here right now hoping to come across something totally new. I was not disappointed. Your opinions with new solutions on this matter were very helpful and also a terrific assistance to me personally. Many thanks for creating time to jot down these things as well as sharing your ideas.http://nikelebronshoes2013.com/

This article is so informative. It really incited interest in me on many points. I agree with much of your views here. Your material has ignited my brain into thinking harder. Thank you so much.http://cheapnikeshoeswholesaleonline.com/

It sounds nice with the fresh beer festival in farmhouse. it seems to be fresh and clear air. thank you for sharing an idea.