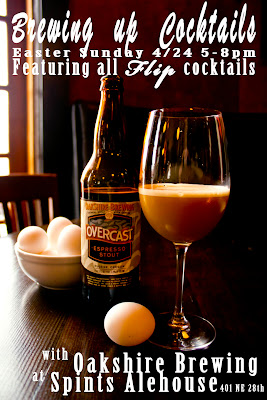 For the fourth edition of Brewing up Cocktails, events exploring the interplay of beer and spirits to create new drinks, writers and mixologists Ezra Johnson-Greenough and Jacob Grier have taken on yet another challenging theme. This time they’re focusing on the 'Flip' class of drinks using whole eggs and will be partnering with Eugene, OR based Oakshire Brewing who will be providing the beers as well as farm fresh eggs from the brewery’s own chickens. Join them on a beery Easter egg hunt on April 24 at Spints Alehouse.

Flips are a class of mixed drinks that use raw eggs to create a rich and creamy texture. What many do not know about flips is that their origins are as a beer cocktail. According to the Oxford English Dictionary, sailors first used the term as far back as 1695 to describe a mixture of beer, rum, and sugar heated with a hot iron poker. The first official record of the modern day interpretation of flips was in Jerry Thomas's 1862 How to Mix Drinks; or, The Bon-Vivant's Companion. In this book Thomas states that:

"The essential in flips of all sorts is to produce the smoothness by repeated pouring back and forward between two vessels and beating up the eggs well in the first instance the sweetening and spices according to taste."

While modern day flips have fallen out of popularity and current definitions of what constitutes a flip vary to sometimes include cream, nog, egg whites, etc. for the purposes of defining the class of drinks and bringing it back to historical roots this chapter of Brewing up Cocktails shall use only whole eggs including the yolk along with beer and spirits to help bring along it's much overdue comeback.


About Oakshire Brewing
The name Oakshire represents Strength, Independence, Community and Bioregion, values held by our owners and employees.   Begun inOctober 2006 by brothers Jeff and Chris Althouse, Oakshire Brewing operates as a production brewery next to the train yards in Northwest Eugene.     We make three year round beers, available in 22oz bottles and on draft found throughout Oregon.  Oakshire makes a rotating seasonal beer available in 22oz bottles and on draft as well.  And the brewers at Oakshire craft a range of single batch beers only available on draft.  The brewery aims to make clean, consistent, high quality beer – humble brewers of delicious beer.

About Brewing up Cocktails
Founded by Ezra Johnson-Greenough, a brewer, writer, artist and event coordinator, Brewing Up Cocktails started as a one-time event for Oregon Craft Beer Month in July 2010 and has turned into something much larger. Johnson-Greenough asked hot local bartender/mixologist and writer Jacob Grier to collaborate with him in crafting some unique beer cocktails in the hope of proving that craft beers can be as good in mixed drinks as they are on their own. The venue they chose had to have great beer and an outstanding selection of fine spirits, and that is where partner Yetta Vorobik's property, North Portland hotspot The Hop & Vine, came in. In addition to a great location for events, Vorobik adds her creative spirit and an adventurous third palate to the mix.
The July 2010 event was met with great interest, but it was not until the partners decided to do a follow-up event in the fall that the critics and public started to catch on. Beervana described one of Brewing Up Cocktails' signature drinks, the Hot Scotchy, as:

"The Greatest Beverage in the World"

"Straight-ahead beer fan that I am, I have to agree that beer cocktails open up a brave new world."

"A merger of Portland’s craft beer and quality cocktail cultures could push the next evolution of our increasingly sophisticated drinking scene."
And finally the Associated Press caught on, with a story carried internationally, including on ABC News.